The changing nature of property sales

One after-effect of the global financial crisis was to give a huge boost to the importance of cash-based transactions, which began to account for about a third of all purchases (from less than a quarter previously). In part, this reflected the significant retrenchment in the risk appetite of mortgage lenders. As the latter has revived in recent years, it is no surprise that, from about 2013 or 2014, the relative importance of cash has ebbed away. 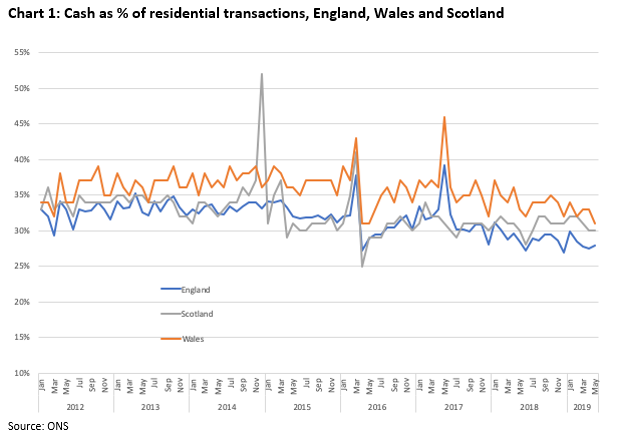 Peaks and troughs for the most part are associated with major changes in stamp duty arrangements, although 2017’s General Election also seems to have had a distorting effect on behaviour.

The decline in the relative importance of cash is mainly an English and Welsh phenomenon at this stage. It is also more evident in southern parts of the country, perhaps reflecting some recalibration of activity on the part of investors.

As ever, there is a wide geographic variation in the importance of cash. 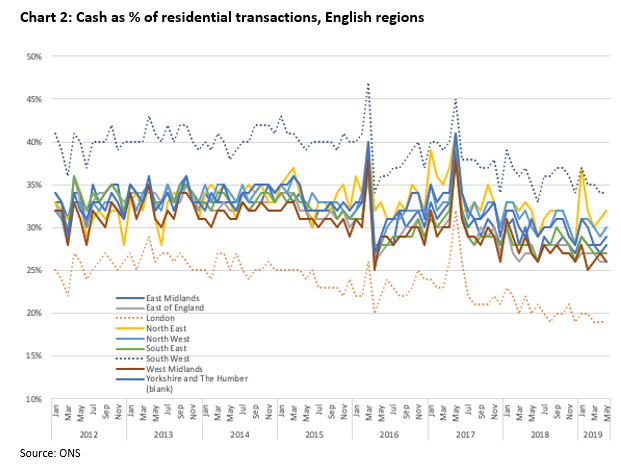 A little surprisingly, cash plays a smaller role in London than elsewhere, at least as far as the volume of purchases is concerned, and has recently dipped below 20% of overall activity in the region. By contrast, and perhaps reflecting the strong interest in holiday homes and retirement plans, it is still the case that more than a third of property purchases in the South West are cash-financed.